For my first blog post proper I’m posting a few quick notes on Lotic’s new album Power. This may be the start of a series of shorter reviews/sketches/notes. Let’s see.

Following Lotic’s work you’re struck by the movement of desire, and the uncoercive rearrangement thereof (Spivak, 2012); in a permeable drive entangled with identity, though not reducible to it. Angular, disjointed, their latest offering Power certainly continues in their strain of electronic music, though there is a softer vulnerability elicited in the opener ‘Love and Light’.

Lotic’s entry of their voice lends itself to a greater intensity of violence and vulnerability, something which Arca has also been developing in parallel. ‘Hunted’ in its whispering undertone, ‘Heart’ wispy and bare, ‘Nerve’ willful. The voice adds to this stillness and knowingness played through in the instrumental title track ‘Power’, a kind of out-of-placeness pre-loaded breaking-down in ‘The Warp and the Weft’. An instrumentalisation of the reanimated ‘phantom limb’, as writer Wilson Harris has formulated.

And yet Power enters an architectural metaphorical spacing that inhabits Lotic’s interplay between audio mix, club performance and track-driven timing. This contributes to an aesthetic environment overlaid between the cinematic and visceral. The overlaying I understand as a kind of response and refraction of the overdetermination of space and time of the contemporary. While this is clearly in conflict with racialisation and gendering, the affective drive found, for instance, in the crackled horns ‘Resilience’ generates this aesthetic mapping of desire for something like freedom, or just the inhabitation of space itself.

This resonates with the haunted motion of closer ‘Solace’, the closing of work-done. Its signifying-power epitomised in the double-image of the cover portrait. The double-play of visage/image eliciting a synaesthetic ‘phonic materiality’ (Fred Moten, 2003), a stylisation of form overlaying the movement of desire. 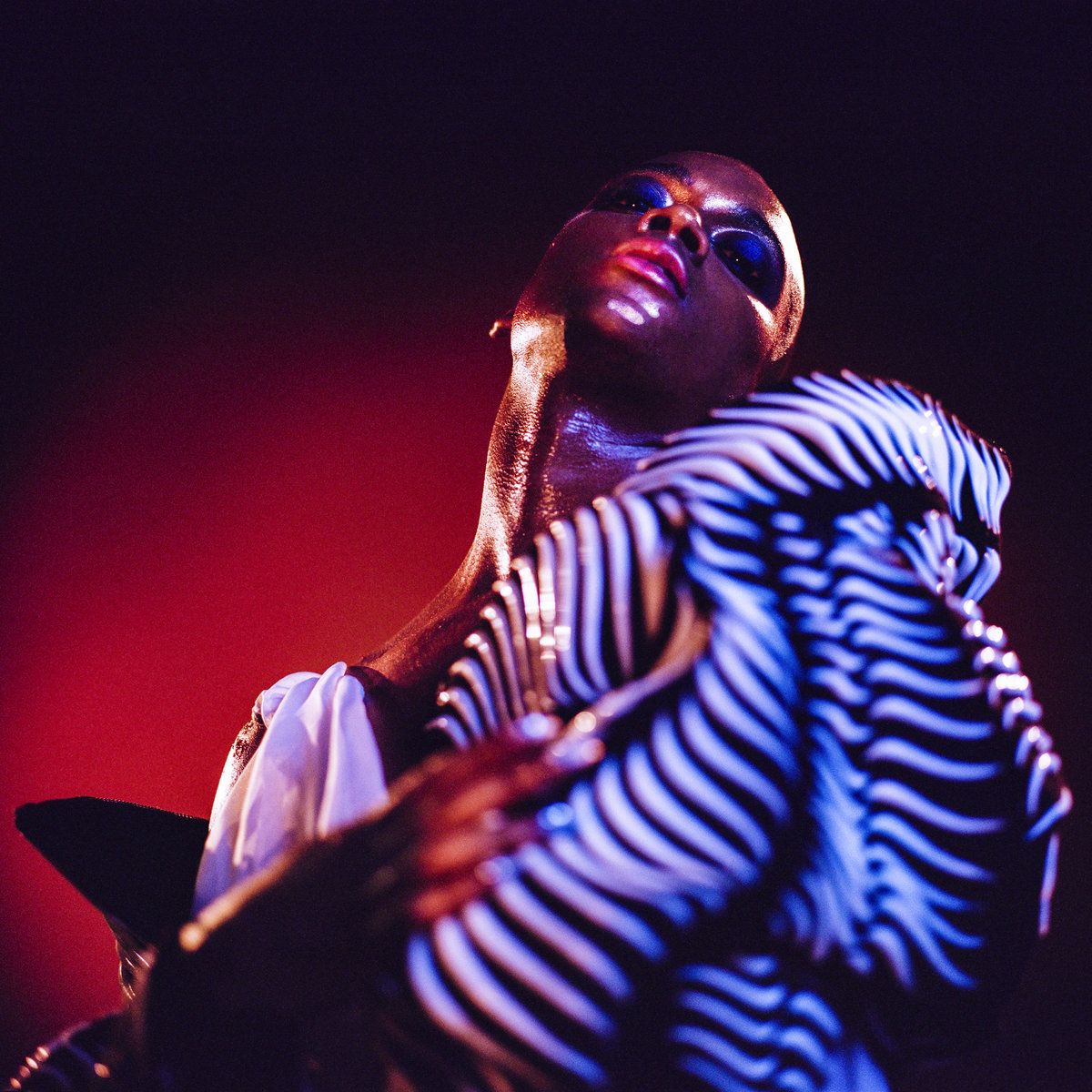 Moten, Fred, ‘Resistance of the Object: Aunt Hester’s Scream’, In the Break: The Aesthetics of the Black Radical Tradition (University of Minnesota Press, 2003)

Spivak, Gayatri Chakravorty, ‘Introduction’, An Aesthetic Education in the Age of Education (Harvard UP, 2012)

So the question of the day is temporality and its politics. Early twentieth century futurist modernism with its grand visions of embracing/deepening/cutting-through modernity gave way to fascist corporeality, communist statism, socialist tower-blocks, third world slums and, worst of all, the institutionalism of ‘modern art’. Then ‘no future’ with the Sex Pistols, autonomia 77 and Ayatollah Khomeini converging in militant dysphoria; truly post-modernist. And out of such wreckage the post-Fordist financialised ‘global’ economy looms, circulating the virtual representation //of commodities/of collateralised debt/ of production/ of containerised ideology// Subjectivities of time are pushed to extremes and representation becomes the key-word. Well how do we actually create space – where does our cultural production come into its own? What becomes of words // lives // memories // the all-important small things? Can we excavate ourselves out without containerising or homogenising and break out from the yoke of institutional legitimation// with fulfilment perhaps? Or are we stuck in the oppression of Now / of Identity / of the increasingly fatuous and vacuous gentrified present of revanchist fundamentalisms while rehearsing our self-indulgent monologues and arrogant entitlements? Are there futures worth constructing?

So let’s talk about time. Temporalities coinciding with our shared spaces intersecting with the banal day-to-day brought together encapsulated within the cultural object and its perennial memories glimpsed through the dirty window the distorted mirror; think the tight  corridor streets and cracking facades of proper professionalism with its musk of displaced loneliness in Wong Kar Wai’s In the Mood For Love. But the redemption is found in the quiet pride, the elegant dress, the depth of self-reflection in the shadow of the haunting lilts of the waltz; they looked better back then, to quote a Southern Discomfort regular. And then trying to break out of the neuroses overhanging in the darker crevices is the depth of struggle trying to search for a future while excavating the scraps of the past. Again think Wong Kar Wai’s 2046 with the melancholic flows of trains transporting frail visions of histories in the struggle to write/to carve/ out of the maelstroms fleeting ephemerality of the cold starkness of glistening skyscrapers and highrises accelerating time’s impasse. The writer’s search for a room, a simple space/raum, a constant lurch for a dream/traum as a struggle of language of articulation of experienced realities defined through a corpus with its oblique multiplicities. And yes its always political and yes its always presupposed by notions of belonging/entitlement/location through bodies and organs and races and genitaltraffik and (infra)structures of knowledge and yes its always conjectural conjunctural questions of the relations of power but its also so much more than that; it’s the (hi)stories of our lives.

Or think Jarmusch’s latest Only Lovers Left Alive with the moody dysphoria of ruinous Detroit and the darkened alleys of Tangiers seeping the slow memories of Tilda Swinton’s aged disposition searching for a space / the right feeling / the right thing away from the cluttersome neurotic cold light of day. Their ethereality transposed through the luxury-stricken plate-glass temples of Boris’s London whilst narrating the abstract present’s relation to avante-gardian Derek Jarman in Isaac Julien’s documentary montage on his archetypal life, Derek. Jarman one of those (post)colonial grand folk forced back to our rainy fascism island and the rubble of London and the bleak of Dungeness, Kent, searching for the fragments that make it all bearable, truly tolerant, carving out other(ed) realities.

Maybe a nod to another Southern Discomfort favourite C.L.R. James and his Beyond a Boundary is in order with its beautiful articulation of cricket, colonialism and class through the prism of lives and losses; English literature at its most sublime. Cricket as an arena of mourning / of melancholic rumination / of the gothic. Boundaries and languages.

In some sense we’re all trying to be Sammy Delaney’s Kid in Dhalgren traversing the Afrofuturist//Afropessimist psycho-geographies of Bellona-Detroit; cyclical and vital. Becoming one of Marechera’s lost acquaintances in strained networks and infrastructures that populate urban modernity; many looking for legitimacy; the losers finding themselves //no gods no masters no glory and certainly no romance #poorbutsexy

As @zentaurum, one of the fallen illegitimates, writes:

i don’t know, i feel like i’m struggling to maintain the struggle, like i feel i only really exist if i don’t resign myself to some definition, because this definition doesn’t really exist… but it’s too hard for those around me seeing me to let me float. like i hate it when people say i’m in between man and woman — no, i don’t like the space between the mattresses, i don’t need to be put there, i don’t need to be solid enough to be pointed at.

it’s really weird admitting that everything’s not super easy and that whilst this who that i am is kind of like a ‘solution’, it’s damn fucking difficult, and it’s not just the ultimate stop, the search-spotlight won’t find me, i’m displacing forever. and i don’t say so, that it’s so hard…

Maybe we’ll find our end past the credits after the fall but well maybe we’ll have to face that the implacable displaced othered-being always exists in the breaks and well maybe that’s the only closure there is. We are all the tragic fallen figure of Tony Soprano ending ambiguously, subject to rumour and scorn, grasping for timeless pasts // perennially writing other[ed] futurisms.